‘It’s the heartbeat of the community’: Capital Chemist’s Nick Johnson on the role of the pharmacy

He’s well known to Canberrans as a former teacher in The Canberra Hospital’s paediatrics unit classroom, but Nick Johnson brings an entirely new set of skills to his new role at Denman Prospect. 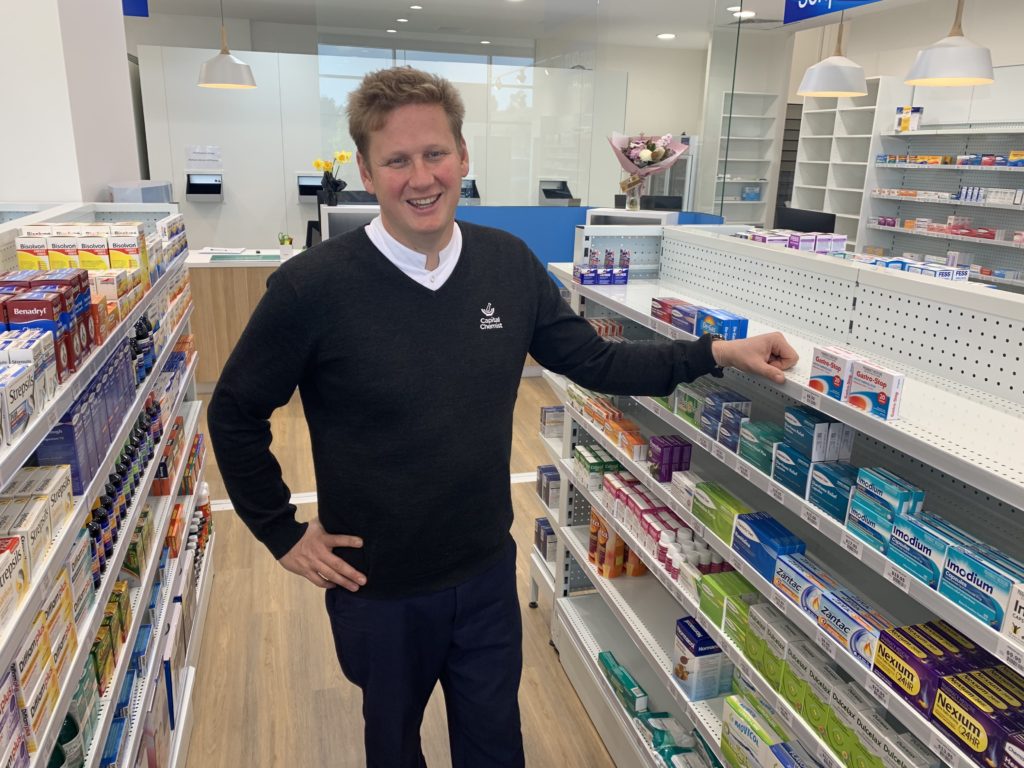 He’s well known to Canberrans as a former teacher in The Canberra Hospital’s paediatrics unit classroom, but Nick Johnson brings an entirely new set of skills to his new role at Denman Prospect.

Nick switched from teaching to pharmacy seven years ago, and is the pharmacist you’ll find behind the counter at our brand new Capital Chemist, located at Denman Village Shops.

Nick says it was during his time teaching injured and sick children at the hospital that he started to fully understand his passion for healthcare.

“Teaching and being a pharmacist might seem like very different career paths but for me they’ve been similar,” he says.

“Both need excellent communication skills, the ability to talk to people at all levels and to be there for students or customers when they’re not always in the best of health.”

There’s no doubt Canberra’s newest Capital Chemist is the definition of a modern pharmacy. The store itself is – underpinned by a minimalist layout – offers contemporary consulting rooms, open areas for assessment and health advice and “unites the best design principles of the other Capital Chemists in Canberra”.

What you won’t find at the Denman Prospect pharmacy are shelves and shelves of medications sitting behind the pharmacists. The script dispensing is performed by Rowa – a “smart pharmacy robot” – that manages inventory and finds and dispenses medication instantly. It’s cutting-edge technology and the “future of pharmacy”, Nick says.

But beyond the technology, it’s the one-on-one conversations and excellent product range that people have come to expect from their Capital Chemist that will also be the hallmarks of the Denman Prospect pharmacy.

“A pharmacy is often the heart of a small town or the suburban shops,” Nick says.

“And that’s what we aim to build on – to build relationships and be the centre of people’s health world.

“We talk to doctors and specialists and other health professionals all day every day. Quite often, we’re the glue that holds it all together and brings all of those extra services in.”

Denman Prospect’s Capital Chemist is looking forward to “growing with the suburb”, Nick says, and expanding from standard pharmacy services like wound care to a baby health clinic and an increased number of vaccinations (cold and flu, whooping cough and tetanus are the shots currently offered at the Denman Prospect pharmacy).

“We have a great range of products – from pain relief to nappies to hire equipment like crutches and breast pumps,” Nick says.

“But we’d love to hear from the community what they want and what services they’d like to see us offer.

“It’s an exciting time for us to be in such a new area as a new business, and personally, it’s exciting for me to deliver healthcare to the people of Denman Prospect in exactly the way I want to.”